iSki Guide To The Resorts With Apres

Everyone loves a bit of apres ski action whether it is hitting the bars straight from the slopes or whether it is heading for the Spa and the wellness area. However, with British skiers the term apres ski tends to be synonymous with drinking rather than relaxing and there are definitely some resorts that are better for an apres ski drink than others. 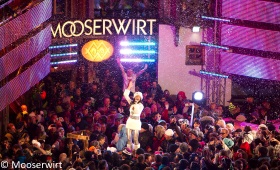 Talk to most skiers from the UK about apres ski and they will tell you about crazy times spend at La Folie Douce in Val d'Isere or hours spend lapping the atmosphere at the Mosserwirt in St Anton. However, there are plenty of other resorts which offer excellent opportunists for apres ski as well. In recent years La Folie Douce has expanded there operations dramatically and now resorts such as Alpe d'Huez, which was not traditionally thought of as being resorts to head to for apres ski, is really cashing in on the addition of a new Folie Douce franchise in resort.

La Folie Douce as has also opened up locations in Meribel and Val Thorens which were already thought of as big resorts for apres ski with famous apres bars such as the Rond Point in Meribel and Bar 360 in Val Thorens. These resorts are now absolute hot pots for those seaking the the ultimate apres ski party. Another fantastic apres bar in the French Alps is Pano Bar in Les Deux Alpes. As with the other aforementioned apres ski venues you are always guaranteed a great party at the Pano bar with open air DJ's and plenty of dancing on tables to be had. You also can not right an article on apres ski without mentioning Ischgl. It is a mecca for party animals. And once you have finished the apres ski you can head out for the evening for a spot of dancing at the world famous Pacha nightclub!

On the left hand side of the page you will notice a list of links to the resorts that iSki recommended for apres ski click on which ever resort you want to find out about and then once your are on the page for that resort click the link for the apres ski. Happy partying!