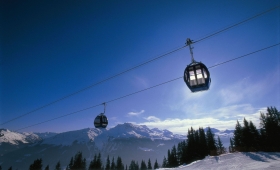 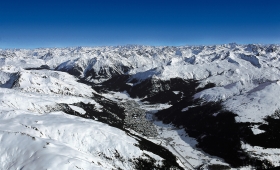 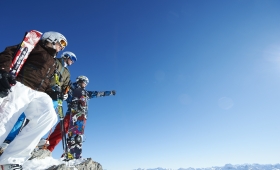 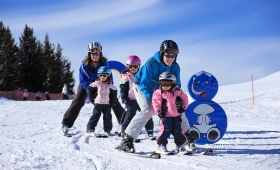 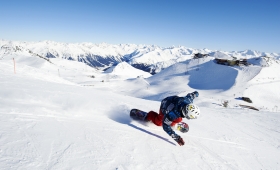 Famed for being the host to the World Economic Forum towards the end of every January, Davos has loads to offer your average holiday maker as long as you avoid the same dates that the WEF is hold. Skiing holidays in Davos are ideal for intermediate through to advanced skiers. It is twined with Klosters and together they offer 320km of piste covering six mountains on all sides of the valley and with 5 distinct ski areas. You can not ski between all 5 areas but they are all covers by the lift pass and they are all linked via the mountain railway as well as a bus service. From Davos Dorf you can get the lift up to the Parsenn ski area and from there you can ski all the way over to Klosters.

The ski resort of Davos

Davos is more of an all year round functioning mountain town than it is a ski resort. It has a year round popular if about 10,000 and it is equally as busy in the summer as it is in the winter. It is actually the highest town in Europe at 1560m. There is always loads going on but the big thing to think about with a ski holiday in Davos is where in town to stay. The area with the most amount of skiing that is directly accessible from Davos is Parsenn which can be accessed from Davos Dorf (this is the area that links over to Klosters). However, if you are more into freestyle skiing than anything else then you will want to be located in Davos Platz in order to give you easier access to Jakobshorn which is where the snowpark is located. Unfortunately when on a ski holiday in Davos there is no avoiding that you will have to travel at somepoint into order to get to the skiing so if you are not fussed about access to either area then a convenient fist ant to the train station or a bus stop might be the thing to look for.

The main benefits to a ski holiday in Davos are that there is always something going on if you go out and look for it so you will never be bored, and that there is a huge amount of on and off piste skiing available. Why not call the iSki sales team today and find out the best way of going ahead with your ski holiday to Davos.

Davos is not thought of as being the perfect resort for beginner skiers it is a bit disjointed which can be off putting for people who have never skied before. However, if you do find yourself in Davos in search of the beginner skiing that they have on offer then do not fear. Ski school for beginners either takes place at Bunda (Davos Dorf) or Bolgen (Davod Platz) depending on which side of the town you are staying in and once you have mastered a few skills on the nursery slope there are plenty of harder blue runs for you to progress onto towards the end of your trip.

The intermediate skiing in Davos is a dream. Intermediates will love the pistes in offer in both Davos and Klosters and there is so much variety that you will never get board. Almost 85% of the pistes in the area are classed as blue and red runs so you will very rarely find yourself faced with a black run and no other way down. In total there is 320km of piste that is covers on the lift pass and given that there are five separate ski areas to explore you can find yourself having completely different pistes and completely different scenery day after day.

Advanced skiers whole regularly book their skiing holidays in Davos will know that hit is all about the off piste. There is a good chunk of black runs to keep you happy and the longest pisted run is the area is a challenging 12km, but if you are lucky enough to get a fresh snow fall when you are out there then the off piste will be too tempting to turn down. You can ski for hours off piste and feel as though you are in the middle of nowhere and still get home. See our off piste section below.

The snowboarding in Davos is awesome and Davos is well known as being on the of the best resorts in Switzerland for snowboarders and freestyle skiers. So much so that back in the early 90's they opened up a bar and hotel specifically aimed at snowboarders. The park on Jakobshorn is always well maintained and they have two half pipes, one of which is located at the foot of Jakobshorn next to the town and was the location of the O'Neil Evolution 6*TTR event since 2006 - 2014. Both pipes are kept on great condition. However, Davos is not just about big air exhilaration, it is also massively about off piste. Our off piste section below will give you a bit more details but the amount if off piste on off in Davos in incredible.

Me of the major appeals off Davos to skiers from all over the world is the amount of piste piste skiing in Davos. There is absolutely loads to be found. Not only is there loads of off piste skiing to be found on the a Davos side but there is even more on the Klosters side. They have a good record for snow fall in Davos / Klosters and it is one of those resorts where you can still find fresh tracks days after a recent snow fall. This is great for holidays makers meaning that you can still get fresh lines even if you are not lucky enough for it to snow whilst you are actually on holiday.

Another big draw is that way that the area is linked up by the mountain railway. You can ski for hours on end and feel completely lost in the wilderness only to find that when you hit the valley floor you find yourself just as stones throw away from one of the mountain railway stops which will take you straight back into Davos. However, it is highly recommended to book a guide because this is not always the case and the last thing that you want is a serious trek to get home.

Given that Davos is a thriving mountain town rather than a small ski resort there is always loads going on. As with any town centre there is a good spread of bars but the fact that Davos has a classy Casino, decent sized cinema, a theatre and that it regularly hold large concerts should give you an idea of how it varies from your average ski resort. The tourist board like to tout it as the 'party town of the Alps' (although I am sure that there are many other tourist boards who would say the same thing about their resorts).

The après ski in Davos normally starts on the mountain in the numerous ski bars with their sun terraces and then spreads down to Bolgen Plaza at the foot of Jakobhorn. Just a minutes walk away from here you will find the internationally renowned Bolgenschanze where they regularly have live music and often internationally renowned DJ's. However, if you are not skiing in Jakoshorn are are on the other side skiing in Parsenn instead, then there are plenty of après ski venues around the valley station yeah you can start your evening and then move further on into town. The Ex-Bar is the place to go of you want to keep the party going through until 5am. It has a bit of a legendary status in Davos and both holiday makers and locals alike love it

Non ski activities and other après ski in Davos

On top of the nightlife there is loads of other fun stuff to do in Davos as well. They have a very successful Ice Hockey team which you can get tickets for from Dec - March and Davos also hold a Snow Polo tournament which normally takes place in the middle of January. On top of that there is plenty of winter walking to be found as well as ice skating and curling. For those who are not satisfied with the thrills offered by skiing and snowboarding you can also try your hand at tobogganing. Davos is the grand father of tobogganing and the first ever toboggan race was held there in 1883. In total there are 9 different toboggan runs to try!

Other properties in Davos