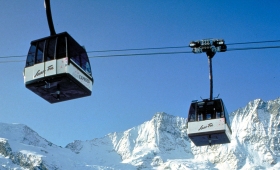 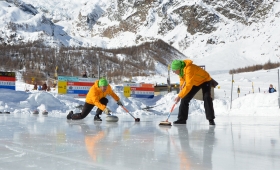 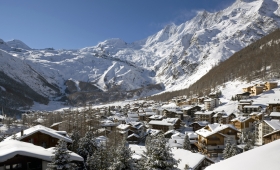 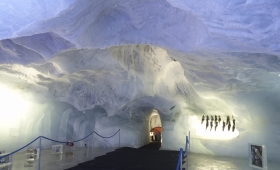 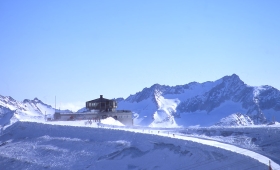 Saas Fee is an absolutely stunning ski resort and it most definitely lives up to its nick name 'The Pearl of the Alps'. It's is one of the prettiest resorts in Switzerland and possibly even the Alps. Although having developed over the years from its origins as a traditional farming village, Saas Fee has stayed true to its routes. The architecture has all be designed in a tradition Swiss manor and everything fits in seamlessly with the surrounding environment. However, it's not just the architecture that gives Saas Fee the reputation that it has. The location of the village is also spectacular with multiple peaks that surround the village all soaring above 4000m. You won't find my other ski resort surrounded by such an abundance of natural beauty.

The Ski Resort of Saas Fee

The resorts itself it situated at 1800m with glacier skiing all the way up to 3500m. As a result ski holidays in Saas Fee can guarantee snow all winter long. So much so that if you are really keen you can even find skiing in Saas Fee during the summer. There is roughly 100km of skiing in the resort so Saas Fee is not a resort for those who like to clock up mileage without skiing the same piste twice, but if you are the sort of skier who appreciates a nice piste when they find one and does not mind skiing it a few times during the course of a ski break then a Saas Fee ski holiday could be right up your street.

There are three main areas to the skiing in Saas Fee, namely Plattjen, Felskinn, and Langfluh. The Plattjen area is the smallest of these areas and as a result many people give it a miss until the end of the week when they have skied all that is to be found in the although two areas. If you have never been on ski holidays in Saas Fee before then this is an understandable way of wanting to do things. However, those who know the area will often head straight for Plattjen and then progress to Felskinn and Langfluh thus avoiding the other holiday makers in resort and gaining themselves a bit more space and time on the slopes.

It is from the Felskinn and Langfluh areas that you can access the heights of Mittelallalin and the highest skiable point of 3500m. At this point you will find the world famous revolving restaurant as well as the world's biggest ice grotto. It is also from this height the you can begin your venture back down into town with a vertical drop of over a mile. It is a spectacular ski and a rest test of the stamina.

It is also worth noting that with the full area lift pass and just a short bus ride you can also access the skiing on offer in Saas-Grund, Saas-Almagel and Saas-Balen. Another point worth noting is that Saas Fee is geographically very close to Zermatt. You would have to book a transfer to get over there but if you were to do so then you will be able to spend the day skiing for a cost of only about Sf30 provided you have a 6 day full area Saas Fee lift pass. 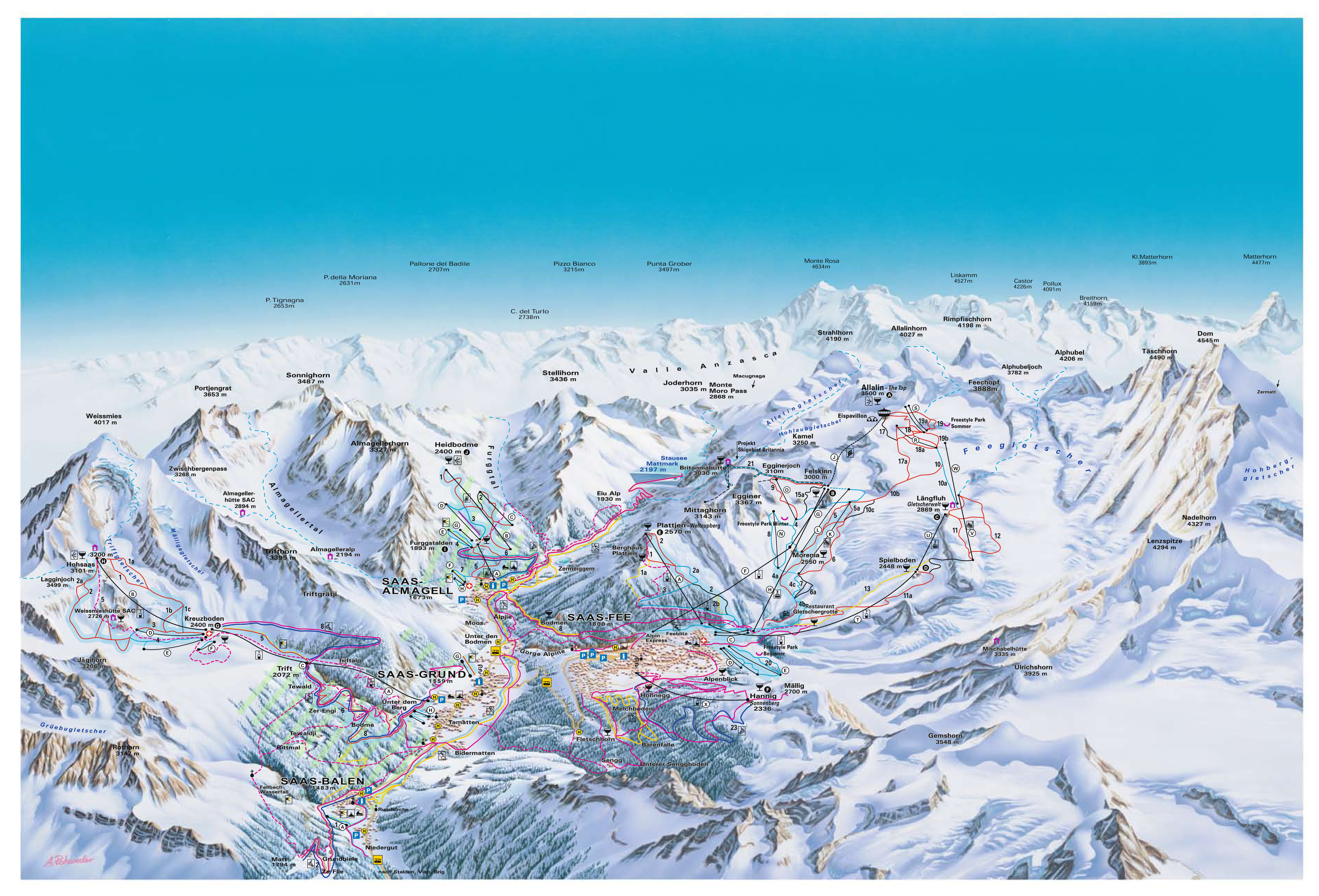 The skiing in Saas Fee is predominately suitable for beginners and intermediate who are very well catered for with a multitude of blue and red runs to choose from. There is also enough to keep advanced skiers happy but if you like clocking up uncharged mileage then you may have to think about getting the bus to Saas-Grund, Saas-Almagel or maybe even take advantage of the ski away day in Zermatt.

Beginner skiers are very well looked after in Saas Fee. At the end of town where most of the lifts set off from there is an area that ideal for beginners and young children. The lifts are easy to get on and off and the slopes are nice and gentle. Another added bonus for beginners is that you can by a reduced rate beginners lift pass meaning that you won't have to fork out for the full lift pass even though you probably won't be using many of the lift.

With the quality of the snow, the well groomed slopes and the wide open pistes, intermediates will love the skiing that is available in all 3 of the main areas off Saas Fee. The run down from the top of Mittalallalin, with its huge amount of vertical drop, is a must do for any intermediate skiers taking their holidays in Sass Fee. Bit be warned your legs will definitely be burning at the end of it. Alternatively stick to the long cruisy blue runs and stop of and enjoy some of the great mountain restaurants on the way.

As you have probably already read there is 100km of piste to be skied in the Saas Fee area. I you want to spend a week skiing without skiing the same run twice then Saas Fee is not the place to head. However, if you simply appreciate plurality skiing coupled with amazing snow conditions then you should definitely take a look at some Saas Fee ski holidays. There are some changeling black runs to be found as well as some tough unpisted slopes which will test even though most expert of skiers.

Off piste skiing in Saas Fee ***

Although not technically off piste, the yellow areas on the piste map signify unpisted slopes which off some amazing skiing if you can get up for first lifts on a powder day. There is also some great tree skiing to be had at the button of the Plattjen area as well as some great opportunities for powder skiing at the top of the Felskinn.

Given the height of the skiing as well as the snow record Saas Fee is a great be if you are skiing for a skiing holiday and want to significantly increase your changes of catching some powder whilst you are away.

There is loads to keep you going for a week if you are thinking about Saas Fee as a destination for your future snowboarding holidays. For those who like cruisy around on your snowboard the piste are very well maintained and the slopes of often wide open with plenty of space to carve. The unpisted runs are great on a snowy day for just leaning back and flowing through the powder, whilst if you are after a bit of park action you will find that too. There are two main freestyle/snowboard parks in Saas Fee during the winter. There is a beginners park and an advanced park which includes a half pipe, so even if you are a mixed ability group you can still any your riding. Saas Fee is to well catered for snowboarding that they even have a summer park up on the glacier for those people for whom the winter is just not quite long enough.

There is plenty of après ski in Saas Fee, from lively bars to chilled out cafes . Some of the more popular après ski venues in Saas Fee include Nesti's Ski Bar, Metro bar and Zur Muhle. There is also plenty of late night action with bars and clubs open until the early hours for those who wish to seek them out.

For those who like to shy away from the crowds there is still plenty to do. A leisurely stole through the traffic free streets will allow you to soak up the quintessential Swiss charm that radiates throughout the resort and a trip down some of the little side streets will no down lead to the discovery of one of the superb restaurants or quite cafes that the village has to offer. You might even want to dabble in a little wine tasting or visit the Village museum. There is also a Bakery museum if you want to experience something a little different. Children tend to love this one as they can try their hand at making bread. The toboggan run is also a must do part of the après ski in Saas Fee. Children and adults alike will love the exhilarating rundown from the top of Hannig.

Other properties in Saas Fee