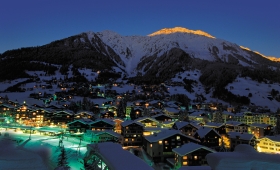 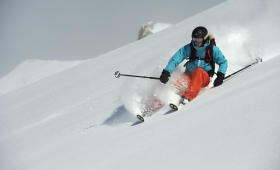 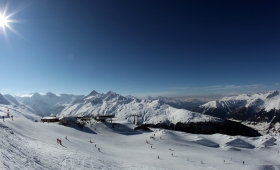 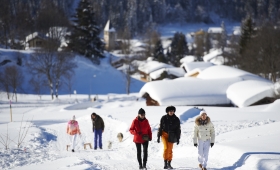 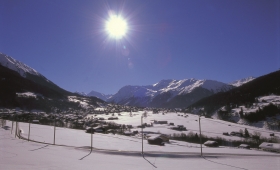 Klosters is one of the worlds most famous ski resorts. Famed for being one of the favourite resorts of the British Royal. It is a beautiful Swiss ski village full of classic alpine charm and character.  People often mistake Klosters for being a resort like St Moritz which is the home to all things glitzy and glamorous but in reality Klosters is a small traditional farming village which happens to have some amazing skiing on offer.

The ski resorts of Klosters and Davos

In total there is roughly 320km of piste on offer to skiers on holiday in Klosters. It is twinned with the neighbouring town of Davos and the area is interlinked by a network of chairlifts, gondolas and railways. Klosters has it's own ski area of about 50km called Madrisa which can be accessed from Klosters-Dorf, whilst you can link into the Parsenn ski area from the centre of Klosters which then allows you to ski over to Davos Dorf. From Davos Dorf you can then get the mountain railway to 3 more ski areas that are covered on the lift pass.

Book your skiing holiday to Klosters

If you are after a relaxing week away with access to some of the worlds best skiing then a ski holiday to Klosters will be right up your street. You won't find any bargain bucket holidays in Klosters but then with skiing you get what you pay for. Why not call our friendly sales team to go over what would be best for you and get your ski holiday booked!

Beginner skiers in Klosters will learn the ropes on the slopes of Klosters' own ski area called Madrisa. It is accessed via cable car from Klosters-Dorf and it is at the top of the cable car where the nursery slopes are to be found. In order to ski back to the village from the Madria area you have to take a run which is classed as black towards the bottom so must novice skiers will get the lift back down to Klosters-Dorf afterwards.

The intermediate skiing in Klosters and Davos is ideal for most skiers. The area is predominantly made up of red runs and the fact that there are 5 different ski areas to explore, with a combined 320km of piste means that you will never get bored. Depending on how long your trip is it is not unforeseeable that you could spend each day of your holiday exploring an entirely different area.

Advanced skiers on holiday in Klosters will love the variety of slopes. The majority of the pistes are red runs, and there are some challenging ones as well, whilst there are a few black runs thrown into the mix also. In total there are 24 blue runs, 40 red runs and 12 black runs spread across the area. You will no doubt also want to test yourself on the longest run in the area which is a gruelling 12km from my top to bottom. Expert skiers on holiday in Klosters will also want to test out the unbelievable amount of off piste skiing that is on offer. See our 'Off Piste Skiing In Klosters' section listed below.

Klosters is not traditionally a hot spot for snowboarding but if you like covering a lot of terrain on piste with a good bit if off piste thrown into the mix and you are not too fussed about the resort having that much nightlife then give Klosters a go. Most if the accommodation on offer is 4* hotels so don't go looking for a bargain basement holiday in Klosters but if you like to combine your snowboarding with a few of the finer things in life then Kloster could be for you. The is no snow park that you can directly access from Klosters but you can ride over to Davos and check out the park over there.

Off piste skiing in Klosters *****

The off piste skiing in Klosters is immense. It's a really hidden gem for off piste skiing in Switzerland and even Europe as a whole. People often talk about the amazing off piste in places like Verbier or Val d'Isere but these resorts are so busy that the moment thee is any snow fall it all gets tracked out within a single morning. In contracts to this you can often still find fresh lines on Klosters days after the last snow fall. The fact that the area is so well connected by the Swiss Mountain Rail service also means that you don't have to worry so much about where on the valley floor you end up. You can ski off piste for hours on end and feel as though you are in the middle of no where only to find that once you reach the valley floor you are only a short stroll away from a station that will take you straight back into Klosters. However, this is not always the case, so hiring a guide is a good idea.

You won't find much in your face après ski in Klosters, it is much more of a low key yet sophisticated vibe. A few drinks on the side of the mluntai before heading back to your hotel to get ready for the evening entertainment which is more than likely going to be one of the piano bars on offer in the 4* hotels.

After dinner it's time to head to Casa Antica which has a disco bar on the ground floor, a live pianist and classy cocktail bar on the first floor and a private members area up on the second floor. Other late night venues are the Chasa Grischuna Piano bar and the Brasserie Bar in Hotel Vereina, both open until about 2am.

Other properties in Klosters