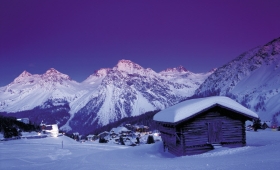 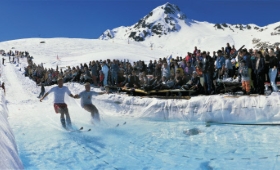 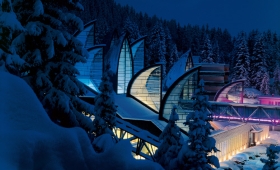 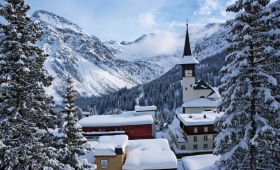 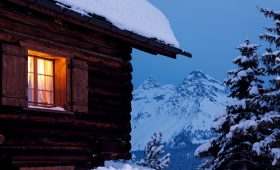 Arosa is a beautiful ski village which has been built on the shores of Lake Obersee and Lake Untersee. In both winter and summer this provides a stunning drop for the village. It is a real hidden gem and only about 4% of the tourist clientele is made up of British skiers. This is probably due to the trend for British skiers to only want to go to high resorts with loads of skiing and up until 2013 Arosa did not fit that bill. However, they have recently spent millions of Swiss Francs building a link between Aros and Lenzerheide meaning that the area can now boast 225km of piste and with a resort height of 1800m Arosa fits the bill for snow security as well. The Arosa / Lenzerheide ski area is now one of the biggest fully linked ski areas in Switzerland!

The ski resort of Arosa

The area is mainly made up of blue and red runs which are great for beginners and intermediates but there is enough to keep advanced skiers happy as well. If you have a group with mixed ski abilities then Arosa could be a good choice for your group ski holiday. In total there are 67 blue runs, 28 red runs and 10 black runs.

Book your ski holiday to Arosa with iSki today.

If you are thinking about a skiing holiday to Arosa then drop us a call. We are always more than happy to help and hopefully we can do some of the hard work for you. 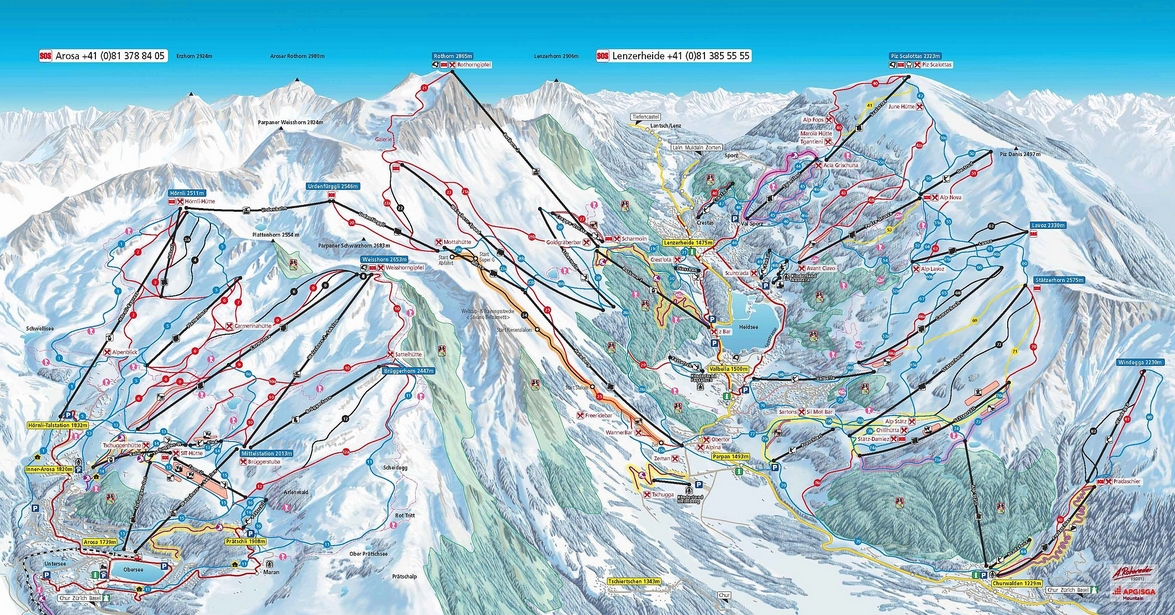 There are plenty of beginner slopes in Arosa although you do have to get a cable car up from the village before you get to them. For the first couple of days beginner skiers will probably get the cable car back down after skiing but after a day or you you should be able to ski back down to the resort of either of the easy blue runs that lead all the way back down to the centre by the lake.

The intermediate skiing in Arosa is like heaven. Full of blue and red runs with over 200km of piste, intermediates skiers will have a field day in the Arosa / Lenzerheide ski area. The highest point in the area is 2865m at the top of Rothorn. From there you can ski all the way down to Churwalden at 1229m giving you a vertical drop of 1636m on all red and blue pistes. Most of the skiing in Arosa is above the tree line due to the resort height but there are some beautiful tree lined pistes to be found on the Lenzerheide side of the area.

The new link between Arosa and Lenzerheide has really brought Arosa into the 21st century for advanced skiers. Where is was once a small resort only really suitable for day trippers or intermediates, Arosa now has a huge amount of skiing to for everyone. About 37% of the area is made up of red and black runs to keep expert skiers busy on piste but thee is a vast variety of off piste skiing to be found as well. Arosa alone has 40km of back country runs and there is even more to to found on the Lenzerheide side as well.

Like many resorts in Switzerland Arosa as adopted snowboarding well. The snowpark in the Tschuggen area has kickers, rails and boxes split into three lines of difficulty (beginner, intermediate and expert). To top it all off they also have a half-pipe as well. There is also a snowpark on the Lenzerheide side as well but it is more suited to beginners. On top of the snowparks, those on a snowboard holiday in Arosa will probably want to check out the off piste. There is quite a lot of back country riding offer in both Arosa and Lenzerheide.

Off piste skiing in Arosa ****

There is loads of off piste skiing in Arosa. Officially there are thought to be roughly 40km of back country runs in Arosa alone. There is even more over in Lenzerheide. Whilst there is a lot of off piste terrain that can be accessed just by hopping off the side of the piste, the best action is the back country on the north face. The routes down to Tschlartschen and Parpan are some of the best on off as is the 'Moilinis' runs from Bruggerhorn down to Moilins. The 'Moilins' run is 6km over with over 1600m of vertical drop. However, it is very easy to get lost in the trees so make sure you hire a guide or are with someone who knows what  they are doing!

The après ski in Arosa is very thin on the ground. There are enough place to stop for a drink on the way down from the mountain but once you get back to the village there is very little going on. There is the odd bar here or there is you want a drink but no real apes ski vibe and that is they way they the locals seem to like it. If you want a week of partying and skiing then Arosa is not the place for you but if you want a chilled out week with good skiing then put it on your list of resorts to check out.

Non ski activities and other apes ski in Arosa

In the middle of January Arosa is host to horse racing on snow. Unlike place like St Moritz they only have a day per year when they holds race but if you want to experience this spectacle without paying St Moritz prices then Arosa is a good bet (make use you check the date if the event before booking). They also have an Ice Snow Football tournament which takes place at the end of Jan and a Comedy Festival at the start of Dec. you might also want to try and catch a nice hockey match whilst you are in town.

Other properties in Arosa