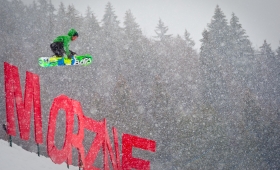 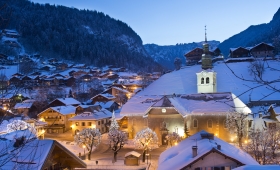 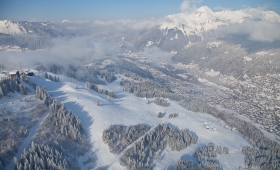 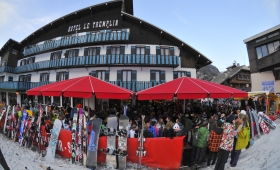 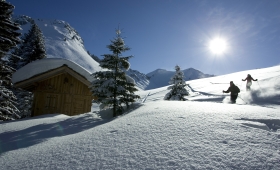 A skiing holiday is Morzine has a huge amount to offer for all levels of skiers and snowboarders alike. It is a pretty mountain town build in a classic Savoyard style and full of classic alpine chalets. It is located within the huge Portes du Soleil ski area in the valley between Les Gets and Avoriaz and is an ideal place to be based for access to all of the skiing on offer in the area. There is a total of 650km of piste that is covered on the Portes du Soleil lift pass which is enough to keep anyone busy for weeks on end. As well as Avoriaz and Les Gets you can also ski over to Chatel and then you can even ski over the Swiss border into Champery, Les Crosets, Champousin, Morgins, and Trogons. It is a very popular choice with holidaymakers as the transfers are just one hour from Geneva.

Far from being a tiny ski village, Morzine is a fully functioning mountain town with loads going on. You will never be bored on a ski holiday in Morzine but be prepared to have to get a bus or walk to get to the lifts as you can ski on both sides of the village. The local slopes on the Morzine lift pass link over to Les Get, and they are on one side of the resort, whilst on the other side of the resort is the Super Morzine lift which links over to Avoriaz and the rest of the Portes du Soleil. You can stay close to the lifts to access either side but if you want to best of both worlds then you will have to stay in the middle which requires a walk to either lift. Because of the way that the resort is set up a lot of people choose to save money and stay in accommodation that is a bit further out from town where you can get a bus directly to the lifts on either side.

Given that Morzine is a proper functioning mountain town there is plenty of après ski and nightlife available. However, it is not in your face like it is in other resorts which makes it a good all-round resort for everyone. If you want a week skiing and partying then you can do it in Morzine but if that is your idea of hell and you just want a quiet week away, with great skiing thrown in, then a ski holiday in Morzine would also work for you perfectly.

There are a lot of accommodation options to choose from in Morzine and it can be hard to know what will be best for you and your ski group. Maybe a catered chalet, a hotel or even a self catered apartment. Why not give us a call to go over your needs and then we will do the majority of the hard work for you. Just sit back and relax whilst we find you the perfect ski holiday. 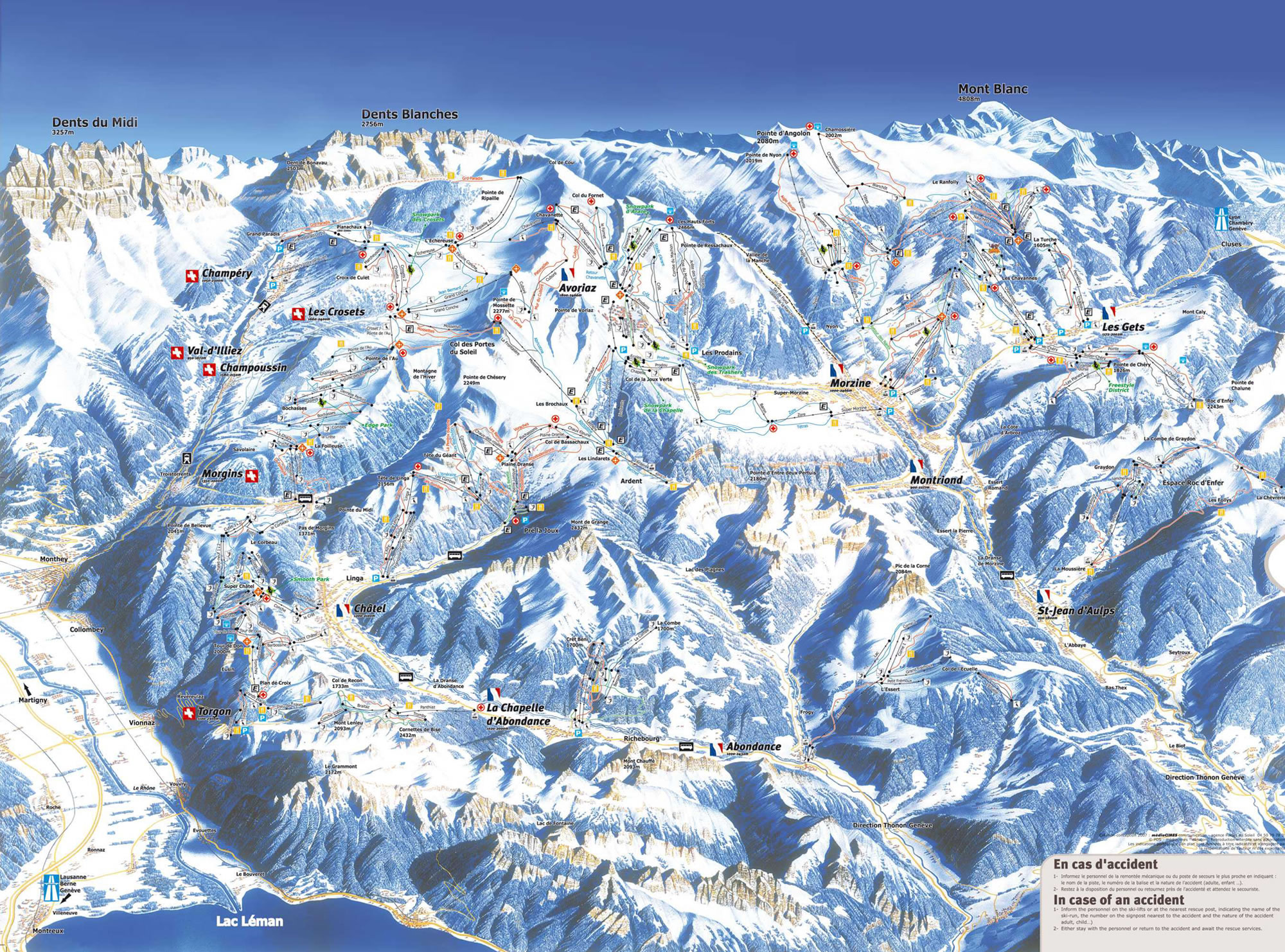 Morzine sits within a huge ski area called the Portes du Soleil, with 650km of piste and skiing to suit all abilities. See our guides below for beginners through to expert skiers as well as a guide to snowboarding and off-piste.

Most beginner skiers on holiday in Morzine will start off by skiing on the local slopes between Morzine and Les Gets. The main lift that takes you up to this are is called the Pleney cable car and it is at the bottom of this lift that the ski school will meet in the morning. The local slopes between Morzine and Les Gets are ideal for learning to ski on as they have gentle gradients and are not too thin and narrow. You also won't find any hair raising pistes with shear cliff faces dropping of down one side. The only downside is that you always have to get the Pleney lift up before getting to the slopes but other than that, the skiing on offer in Morzine is perfect for beginners skiers.

There is a bucket load of intermediate skiing in Morzine. Of the 286 runs that are on offer, 259 of them are blue and red runs. Most intermediates skiers on holiday in Morzine will want to go for the full area pass giving access to 650km of piste. However, there is 150km of piste on offer just in Morzine and Les Gets alone. Should you decide that you want to keep the budget under control then just purchasing the local area lift pass may well suffice.

There is an abundance of advanced skiing in Morzine and the rest of the Portes du Soleil. There are 107 red runs and 27 black runs for those who like skiing on piste and the opportunities for off-piste skiing are seemingly endless (see our off-piste skiing in Morzine section below). The longest run in the area is 11km top to bottom which is a serious ski and with runs like the infamous 'Swiss Wall,' there is always a challenge that can be found. There is also a whole bunch of snow parks in the area for anyone who is looking for some even more extreme action.

For snowboarders from the UK a snowboarding holiday in Morzine is still as popular as ever. Snowboarders are attracted by the vast amount of piste on offer, the high volume of snow parks in the area, the great opportunities for off-piste riding and the variety of nightlife that can be found. In short Morzine has nearly everything that you can ask for as a destination for a snowboard holiday. In total there are 6 snowparks in the area and they are all very well maintained. 'The Stash' (in Avoriaz) is probably the most famous as it is sponsored by Burton and many a photoshoot has taken place here. It is full of hips, boxes, and wooden rails that are all built-in fixed positions so as soon the snow falls they are good to use. The picnic table to drop off is one of the most famous and most photographed hits in the area.

When it comes to off-piste skiing in Morzine and the surrounding area it is hard to know where to start. There is just so much on offer and unlike other major ski areas such as the Espace Killy and the 3 Valleys it does not get tracked out just hours after it snows. You might not find fresh lines for days and days after it snows but if you can't get out first thing then you will still be able to get fresh tracks in the afternoon. In the local area of Morzine head to Nyon and Chamossière if you are looking for fresh tracks, whilst if you find yourself over in Les Gets then head to Mont Chery. However, Avoriaz is the best place to head if you are a real powder hound. The Canyon du Pschott which can be accessed via the Express du Fornet lift offers endless routes with rock drops and natural gullies all the way down. There is also a great off piste descent down from Avoriaz to Morzine and some equally as good routes on the way over from Avoriaz to Chatel.

As you would expect from a proper town rather than a small little village, Morzine has absolutely loaded going on. This is plenty of venues for après ski in Morzine but if you do not know where they are then it is easy to miss then. Between 4 pm and 7pm, Robinson's is one of the most popular bars as in Le Rhodos where they serve Mutzig, a super-strong beer which has lead to the coined fraise 'Mutzig Made Me Do It'. Don't have too many or you will be waking up in the morning and you will understand where the fraise came from. Further, into the center of town, you will find The Cavern which is possibly the most popular nighttime spot in Morzine. It is open until 2 am and is always busy. Later on into the night check out one either l'Opera or Le Paradis the two main night clubs on offer in Morzine.

The fact that there is so much going on in Morzine makes it great for any non-skiers that you have in your ski group. There is loads of snowshoeing with over 80km of winter walking trails and there is an ice rink for skating which also holds entertaining ice hockey matches, plus there is a fitness center with squash courts and a climbing wall. There is a cinema which shows English films and there are plenty of shops for a spot of retail therapy.  As with most ski resorts, there is also tobogganing on offer which always makes for a fun group activity.

Other Activities in Morzine

Other properties in Morzine