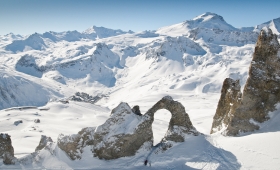 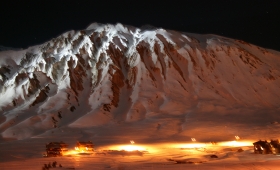 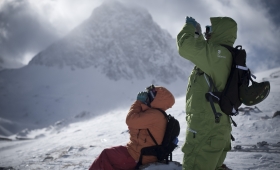 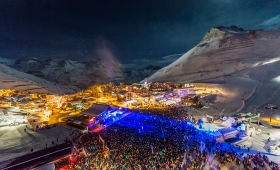 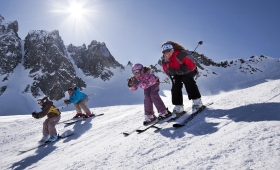 Resorts don't come much more popular than Tignes, even in the Alps. Skiers and snowboards alike flock to the second highest French ski resort. Tignes guarantees snow, with one of the best snow records in Europe, which is less surprising when you remember that it sits 2100m above sea level, and can even keep its glacier open almost year round. The Tignes snow park is on the glacier during the summer, ensuring snowboarders and freestyle skiers are always in the heart of the best conditions.

While Tignes is open almost year round, at this time we regrettably cannot offer summer bookings.

The Ski Area Of Tignes And Val d'Isere

The world-famous Espace Killy region of the French Alps comprises two resorts and their associated runs. Tignes and Val d'Isere deservedly dominate talk of French skiing; with over 300km of on-piste runs between them, two snow parks, and two glaciers.

While Tignes lacks the traditional aesthetic at the heart of Val d'Isere, its purpose-built nature more than makes up for that; ski in ski out convenience is the norm here rather than the exception, and accommodation can be found in apartments, chalets, and hotels.

The Ski Resort of Tignes

There are five distinct areas within the resort of Tignes itself. Les Broisses, Les Brévières, Val Claret, Le Lavachet, and at the centre of the resort, Tignes le Lac, also known as Tignes 2100 due to its height above sea level. Val Claret is on the other side of the lake, sitting two hundred metres higher. Over the course of the winter, the lake itself is deeply enough frozen to be walked across.

Have no fear, though; a local lift pass will grant access to any run in Tignes from any part of the resort, and an Espace Killy lift pass will extend that to grant easy access to Val d'Isere's runs, including the famous Olympic black run La Face.

The first question when organising a skiing trip for more than one person is always what level of skier a resort caters to. It will come as a relief to know that Tignes' slopes offer a range of runs suitable for all skill levels, from nursery slopes up to those chosen for the 1992 Winter Olympics. There is also the world renowned snowpark and superpipe for those who are even more adventurous.

It's customary in the Espace Killy for the lifts servicing the nursery slopes to operate free of charge, which makes beginners' skiing in Tignes unusually welcoming for the Alps. For the most part, it's recommended that beginners don't buy lift passes for the first three days of their holiday, when they feel ready to take on trickier runs, as the saving this offers is considerable.

Blue and red runs are strongly represented in Tignes, with more than enough to provide several weeks' variety – there's no need to repeat the same runs unless you enjoyed them enough to choose to. Of particular note, however, the run from the top into central Val Claret is astonishing, and the view from atop the Grande Motte glacier is well worth the effort involved in getting there.

The more difficult end of the reds and Tignes' famous black runs guarantee that while the relative novices in your group are getting to grips with the piste in earnest, any advanced skier will find an engaging challenge of their own. The famous, long Sache run from Tignes 2100 to Les Brévières and the difficult, thrilling schuss of Trolles, both stand out as experiences not to be missed for a skier worth his salt.

The snow park and halfpipe in Tignes used to play host to the European X Games, meaning that whether you'd rather just enjoy a run through the beautiful powder or you're more at home jibbing to your heart's content, Tignes is an incredible experience for any snowboarder, from beginners to the very best. Elsewhere in the Espace Killy, Val d'Isere boasts another snow park of almost the same quality.

If you'd rather experience cruising runs than the controlled intensity of a snow park, Tignes le Lac in particular holds a snowboard run called Le Palafore that's become a favourite of travellers worldwide, whatever their experience level.

The amazing snow record Tignes' altitude ensures means that the off piste is phenomenal, with spectacular powder throughout the season, including the renowned if dangerous challenge of skiing the fingers, a series of challenging couloires. But while not everyone is willing to take that risk, the lower reaches of the Grande Motte are excellent, and le Spot is that incredible rarity, a cultivated and controlled off piste area atop Val Claret.

The famous La Folie Douce in Val d'Isere always grabs the headlines when it comes to Espace Killy apres ski locations, and it is easy to stop at La Folie Douce for a spot of apres ski and still get back to Tignes on the last lift. However, Tignes is well supplied, with Val Claret's Couloir Bar and the Loop in Tignes le Lac being two of the best known and best regarded.

Night clubs are equally well represented here, with Tignes 2100's Jack's Club being one of the standouts. Val Claret, of course, has a unique vibe and the Melting Pot has established a name of its own.

Whatever you're in the mood for, between Tignes and Val d'Isere you're guaranteed some access to it. It's as easy to unwind here as it is to find a run to suit you.

Other Activities in Tignes

As a purpose built resort, Tignes lacks some of the odder pastimes of Val d'Isere – though the aerofoil trips offered there are just as easy for Tignes visitors to embark on – but with quad bikes, buggies, helicopter flights, and the like it's easy for an active holidaymaker to have a blast without once strapping on skis or board.

In the winter, when the lake’s frozen, ice driving, husky sledding, and even horse riding are on the menu. If you’d rather not go to that kind of effort, however – and it would be hard to blame you – there’s always the resort’s luxurious health spa and swimming pool. Access to the swimming pool is free with your lift pass but there is a charge for the spa facilities. Why not treat yourself?

You're going to the French Alps; a little luxury never hurt anyone.

Other properties in Tignes