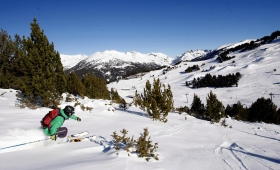 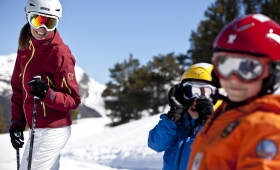 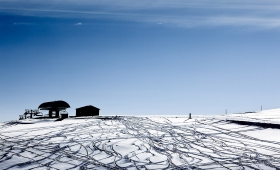 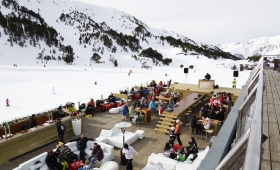 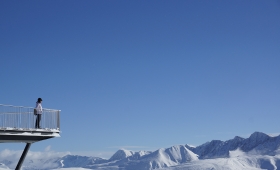 Welcome to Pas de la Casa, Andorra’s ultra high altitude ski resort standing at a dizzy 2080m, situated in the middle of the Pyrenees on the French border. Being one of Europe’s highest resorts, its extreme height and good snowmaking machines ensure great snow conditions all season long.

Pas de la Casa is part of the Grandvalira ski area, which has a massive 205km of slopes that are perfectly suited for intermediates. The Grandvalira ski area includes other popular resorts, such as Soldeu, Canillo and the Grau Roig. The Grau Roig was known simply by the locals as “Grau” is the stunning uninhabited region between Pas de la Casa and Soldeu el Tarter. It offers some unbeatable scenery and some fantastic tree-lined runs down to Lake Lessons and some great off-piste opportunities. We have some fantastic Pas de la Casa ski holiday packages on offer where it is possible to fly from your local airport.

The town is vibrant and lively and is know as “pas” by the locals and attracts a young crowd, who like a good time and some refer it as the Ibiza of the Pyrenees. There are a large number of bars, restaurants and nightclubs that are open until the early hours that offer great value food and drinks.

The first mechanical lifts were introduced in 1957 by the Andorran ski pioneer Rancesc Viladomat and was developed rapidly over the years. The Grandvalira ski area was created in the 2003-04 season making it the highest resort in the Pyrenees.

We have some fantastic hotels in Pas de la Casa in great locations at unbeatable prices. We also have some great value apartments on offer as well. Please call our experts to see if we can find you a fantastic holiday to Pas de la Casa. iSki Sales line - 02037780123 or email [email protected].

Other Resorts in Andorra

Pas de la Casa is the highest resort in the Pyrenees standing at a staggering 2080m high; thanks to its height and modern snowmaking facilities the snow is ensured throughout the winter season. It is part of the Grandvalira ski area that has a massive 205km of slopes and links it to other great resorts such as Soldeu, Canillo and the Grau Roig.

Andorra’s ski schools are English-speaking and have excellent reputations that have regularly won awards, for been the best in Europe. There are 3 ski schools in the area one in Pas de la Casa; the others are in Cortals and Grau Roig.

Pas de la Casa is really an intermediates paradise with 38 blue runs and 32 red runs there really is so many runs to choose form.

For those looking for something a little more challenging there are 22 black slopes to explore. Notably the Fis Taupes, which is just above the village and the Granota a tricky tree-lined run that is on the Grau Roig.

The terrain as a whole is a great place to learn, but for the more experienced there are plenty of natural jumps above the tree line. There are also some great descents through the trees that can be a lot of fun.

There is a snow park and half pipe known by the catchy name “Coma 111” which holds many competitions, every winter season. For those of you who like to spend all day in the park you can buy a “Snow Park” day pass for 35 Euros that covers the route to the park and access all day.

Pas de la Casa has long been a favourite for those who love a party, with over 30 bars to choose from you really are spoilt for choice. Most of the bars have happy hours that start the moment the pistes are closed and stay busy until the early hours.

Popular bars include Deja Beer, which is a cellar style bar where each table has a different beer tap on each table so you can poor your own beer. The Underground is probably the most popular bar in Pas de la Casa that is very popular during the après hours and is open late. Whichever bar you go to in Pas de la Casa expect a great atmosphere and duty free drinks at some very reasonable prices, you are guaranteed to have fun.