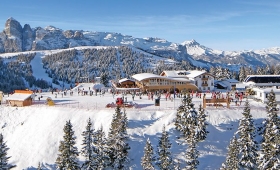 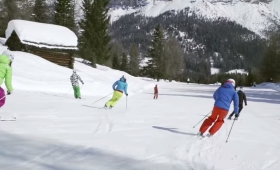 La Villa is a quaint little Italian ski village with the Dolomiti Superski. It is quiet in the evenings although there are a few bars and restaurants. The big attraction of the la Villa is the stunning scenery and the fact that you can ski onto the Sella Ronda, thus giving you a huge amount of skiing if you purchase the full area lift pass. The village is located within the region of Alta Badia and Sud Tyrol which. The backdrop to the village is breathtaking as you might imagine given that it is list as a UNESCO world heritage site. IF you have never skied in the Dolomites then you really must try it! The scenery is like no other mountain range in Europe and at sundown, the racks glow a beautiful shade of pink. It really is a site for sore eyes.

The ski resort of La Villa

On the local slopes of the Alta Badia alone there are 130km of piste. This is the amount of skiing that is on offer from La Villa if you just purchase the local area lift pass. However, the main attraction is being able to access the Sella Ronda Ski Circuit offering roughly 800km of connected pistes. From La Villa you can link onto the Sella Ronda via the neighboring resort of Corvara and the extra expenditure on the lift pass is well worth it. A ski holiday in La Villa really comes into its own when you can make the most of all of the skiing that is on offer. It feels as though there is an endless amount of skiing. However, do not make the mistake of thinking that the Sella Ronda is all about just skiing the circuit. No doubt you will want to do the clockwise and the anti-clockwise circuit at least once during your stay but the beauty if the area is exploring the surrounding valleys. But resorts such as Selva, Arabba and St Cristina have some great skiing on offer once you take a detour off the Sella Rhonda loop. The skiing on the Marmolada Glacier in Arabba is some of the most challenging in the region if you really want to push yourself.

Book your ski holiday to La Villa with iSki today!

For helpful and friendly advice on booking your La Villa ski holiday just call our friendly sales team and we will guide you through the process fro start to finish making the process as easy as possible. 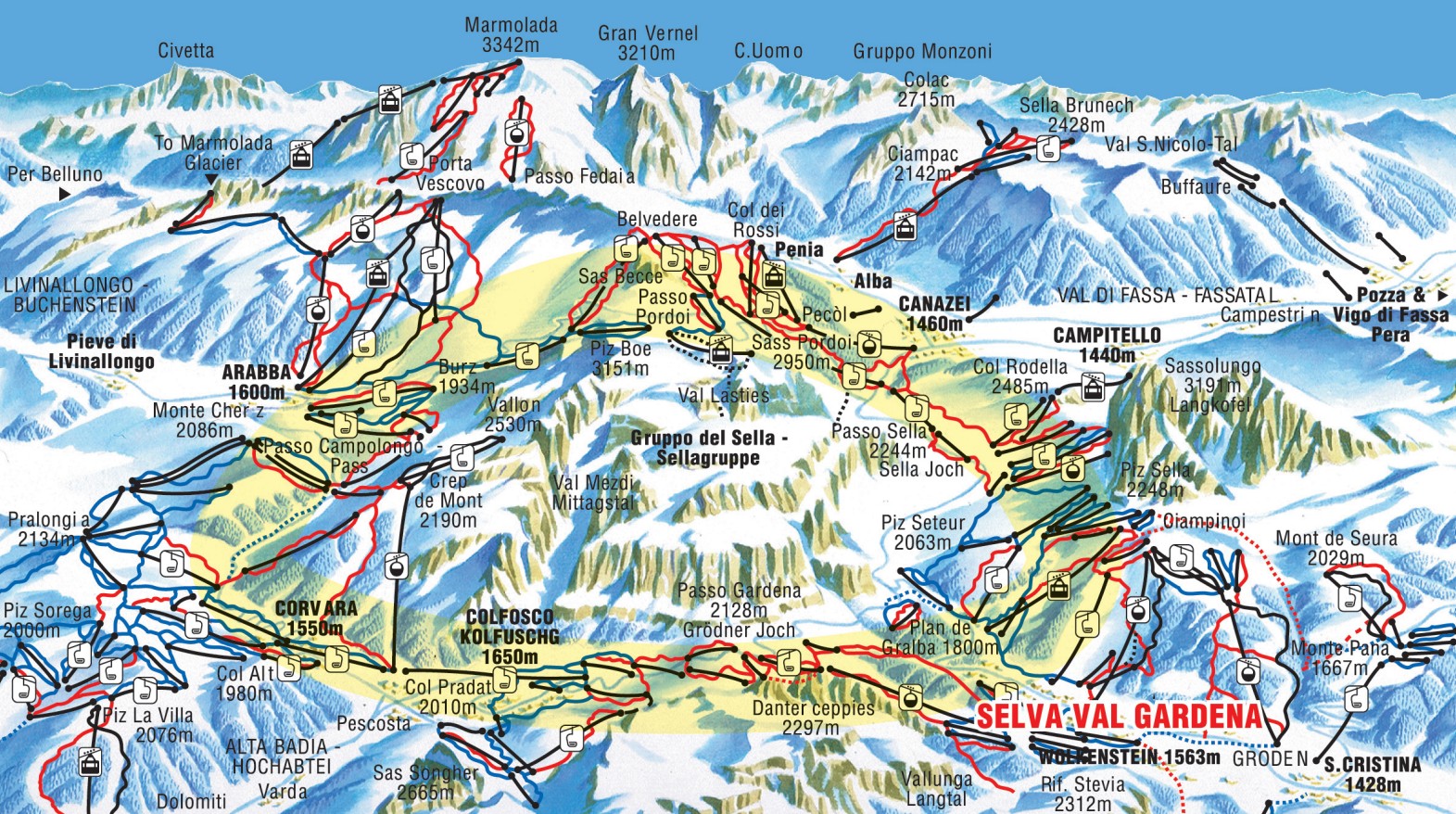 There is not much skiing in La Villa itself bit there are some easy access nursery slopes for beginners to practice on. Once you have found you ski legs and feel that you want to move onto the next step there are plenty of easy blue runs over in the neighbouring resort of Corvara.

The slopes of the Alta Badia are perfect for intermediate skiers. There is not much skiing in La Villa itself but it easily links over to Corvara which has an abundance of blue and red runs, making ski holidays in La Villa ideal for intermediate skiing. Intermediate skier will probably probably want to purchase the full area lift pass so as to also access the full Sella Ronda ski circuit but if you are working on a tight budget then the 130km of piste on the local slopes of the Alta Badia area should do you fine.

The fact that you can access are an area of almost 800km of piste means that the advanced skiing in La Villa and beyond makers for a great ski holiday. Experts will definitely want to get the full area pass. Not only does it get you the 800km of piste on offer in the Sella Ronda but hit also gives you unlimited access to every resort within the Dolomiti Superski. The 800km of piste should be enough to keep you happy but for those  more adventurous skiers amongst you you might want to consider a ski away day in somewhere like Kronplatz or Cortina.

There is plenty to keep you busy for a week on a snowboarding holiday in La Villa. There is so much snowboarding in La Villa and in the area as a whole that you will never get board of the on piste snowboarding. There are also various snow parks in the are that snowboarders will love. In the local area to La Villa you will find the Alta Badia snow park between the La Freina and Ciampain piste at the Piz Sorega plateau. There is a boarder rods / skiercross as well as rails and kickers that are suitable for all levels. There are also loads of other snow parks to discover as you find your way around the Sella Ronda and explore the neighbouring resorts. The snow parks in Arabba and Canazei both have half pipes on offer.

For some great off-piste skiing in La Villa and beyond. Head over to Colfosco for the best of the off piste in the Alta Badia with some great tree line descents. Else where in the Sella Ronda Val di Fassa offer some worth whIle off piste from the top of the Sass Pordoi cable car. However, be careful skiing off piste Itlay. As off piste skiing is heavily monitored by ski the local patrol so to stay on the right side of the law get a local guide. There are also some runs in the area that are specifically kept unpisted, specifically for those looking for fresh powder after a snow fall but not wanting to head off piste.

There are a few bars and restaurants in La Villa but there is not really après ski scene. If you are looking for après ski in La Villa then you are going to have to make do with a few quiet drinks. However, if one quiet drink leads to another and so on and so forth then the friendly local atmosphere will go a long way to making an enjoyable evening.

Non-ski activities and other après ski in La Villa

La Villa is probably not the first resort that springs to min for non skiers. However, with amazing scenery, plenty of snowshoe walking and Nordic walking as well as a local indoor swimming pool, there is still plenty to do other than just hot the slopes.

Other properties in La Villa