Posted by: andrew 6 years, 6 months ago 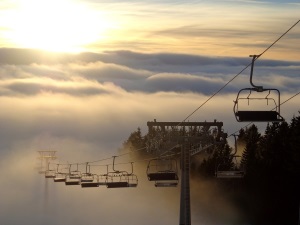 If you’re an avid skier, you’ll know that feeling of tension, waiting for the snow reports each season to see when you’ll be able to ski, and where will be best. For the past two decades or more, even if you don’t know it, these snow reports are becoming critical to your ski vacation. It seems more and more difficult to find reliable snow, and this has led some to wonder whether this exhilarating pastime might be coming under threat from global warming.

While California is the first area of the world to spring to mind, due to their ongoing drought and complete lack of snowfall, the fact is that some European ski resorts are in trouble as well. In 2003, it was estimated that as many as 15% of Swiss ski resorts were experiencing unreliable levels of snowfall, and losing business because of it.

In 2009 the Bolivian resort of Chacaltaya shut, due to losing 80% of its glacier in 20 years. That’s a scary  figure, for climate change scientists and avid skiers alike.

It’s not possible to say for definite how skiing will actually be affected on a long term basis. Scientists identify slopes in the 900 - 1500m altitude range as being the most at risk. If the snowline were to retreat even further up the alps, to the 1800m mark, 25% of European ski resorts would have to seek other options to stay open.

Despite these statistics, no major European ski resorts have had to close in recent years. Forecasters are urging skiers not to panic about lack of snowfall which still falls within reasonable expectations, saying that a bad start to the 2014/15 ski season is only as rare as one in six. Whilst there is no doubt that you should check the snow reports before booking your stay the situation is far from desperate.

High altitude areas are less affected by climate change, keeping consistent snow cover for longer.  but there are low lying areas that maintain excellent skiing conditions too. The famous Skiwelt, a relatively low-altitude area of the Austrian alps receives regular snowfall, and that’s not likely to change any time soon. The Skiwelt proves that it’s not just high altitude resorts that can keep operating, giving hope to a lot of European skiers.

And ski resorts are fighting back, of course. Artificial snow machines are among the most popular methods, allowing resorts to create snow no matter the weather, and keep their slopes open. Ski resorts higher in the mountains are already beginning to take measures to cut their own emissions, helping to slow and stop the global warming problem before it becomes a problem.

Plenty of resorts still boast guaranteed glacier skiing. In France, the Val Thorens, Les Arcs and La Plagne resorts are reporting consistent snow cover. The same is true for the Cervinia and Sestriere resorts in Italy, Obergurgl and Kaprun in Austria, and the Swiss resorts of Zermatt and Verbier. These high altitude locations prove that, whilst some areas are experiencing difficulty, skiing as a whole is not under threat.

Global warming is a global concern, affecting everyone on the planet, and some of the coldest places in the world are feeling the change more acutely than others, but plenty of places remain where the snow cover is almost constant. We can all help to reduce the impact of climate change, and many ski resorts are on the forefront of these conservation efforts. There are plenty of people working to preserve our ski resorts for the future.